For some people, school days are the best days of their lives. Even if that’s not the case for you, these funny school jokes and puns are in a class of their own! In fact, they’re guaranteed to pass any hilarity test! So whether geometry is your area or words fail you when it comes to languages, we hope you enjoy our collection of the best school jokes.

Why did the teacher wear sunglasses?

Because her students were so bright.

Jack and Molly are sitting in school one day.

Molly is asleep when the teacher asks her a question, “Molly, who created Heaven and Earth?”

Jack sees Molly is sleeping and quickly pokes her with a sharp pencil.

The next day the teacher asks, “Molly, who created Heaven and Earth?”

Molly is again asleep and is poked by Jack’s pencil.

The next day, for a 3rd time, Molly is asleep.

This time the teacher asks her, “What did Eve say to Adam when she had so many children?”

Jack pokes Molly with the pencil again, and this time Molly screams, “If you stick that thing in me one more time I’m going to crack it in half!”

Why did the student throw his watch out of the window at school?

He wanted time to fly.

Why was the geometry class always tired?

Because they were all out of shape.

A dad is very concerned about his son’s bad grades in math so he decides to register him at a Catholic school.

After his first term there, the son brings home his report card.

It shows he’s getting “A”s in math.

The dad is, of course, pleased, but asks his son, “Why are your math grades suddenly so good?”

The son says, “When I walked into the classroom the first day, and I saw that guy on the wall nailed to a plus sign, I knew one thing… This place means business!”

Why did the student take a ladder to school?

Because he was going to high school.

Who’s the king of the classroom?

Decimals have a point.

A general rule of grammar is that double negatives are a no-no.

A teacher says to her class one day, “Whoever answers my next question, can go home.”

A boy throws his bag out the window.

The teacher asks, “Who just threw that?”

The children were lined up in the cafeteria of a Catholic elementary school for lunch.

At the head of the table was a large pile of apples.

The nun had written a note, and stuck it on the apple tray. It read, “Take only one. God is watching.”

Moving further along the lunch line, at the other end of the table was a large pile of chocolate chip cookies.

One child whispered to another, “Take all you want. God is watching the apples.”

Why didn’t the skeleton go to the school dance?

Because he had nobody to go with.

Why was school easier for cave people?

Because there was no history to study.

This boy was in school one day when he became desparate to go to the bathroom.

So he asked the teacher, “May I use the bathroom?”

The teacher replied, “No, not unless you say your alphabet.”

When he finished, the teacher asked him, “Where’s the p?”

The boy replied, “Half way down my leg…”

If you see an improperly lower-cased letter, you must capitalize on it.

Why did the cross-eyed teacher lose her job?

Because she couldn’t control her pupils.

Two boys were arguing in class one day when the teacher walked in to the classroom.

The teacher asked them, “Why are you arguing?”

One of the boys replied, “We found a ten dollar bill and decided to give it to whoever tells the biggest lie.”

“You should be ashamed of yourselves,” said the teacher. “When I was your age I didn’t even know what a lie was.”

The boys gave the ten dollars to the teacher.

One day a teacher stands up in front of her class and asks if anyone in the class is an idiot, and says that if there is one then he/she should stand up.

After a minute a boy stands up.

The teacher then asks the boy if he actually thinks he’s an idiot.

The boy says, “No, I just didn’t want to see you standing there all by yourself.”

Why did the boy study on an airplane?

Because he wanted to get a higher education.

Stop going in circles and get to the point.

What’s the longest word in the dictionary?

Smiles. Because there’s a mile between the first letter and the last.

The teacher said to one of her students one day, “I wish you’d pay a little attention.”

The boy replied, “I’m paying as little as I can.”

Why was the geometry teacher off school?

Because she’d sprained her angle.

Mom says to her son, “What did you do in school today?”

Her son replies, “We played a guessing game.”

The mom says, “I though you had a math exam?”

If a picture is worth a thousand words, then why shouldn’t we judge a book by it’s cover?

A young boy goes into school one day and says to his teacher, “Would you punish me for something I didn’t do?”

His teacher says, “Of course not.”

To steal from one person is plagiarism.

To steal from many is research.

What Do You Call Jokes

Why was the broom late for school?

The teacher is droning away in the classroom one day when he notices a student sleeping at the back of the class.

The teacher shouts to the sleeping student’s neighbor, “Hey wake that student up!”

The neighbor yells back, “You put him to sleep, you wake him up!”

Why did the student bring scissors to school?

Because he wanted to cut class.

I was caught studying the periodic table in English class.

It was an elementary mistake.

Kids who have one-to-one tuition are in a class of their own.

How do bees get to school?

If you enjoyed our favorite puns and jokes about school, be sure to check out the rest of LaffGaff for lots more school jokes: You’ll just have to come to terms with Y we’ve brought you these funny algebra jokes and puns! They’re X-actly what you need to make you laugh and there’s nothing variable about their quality! These funny art jokes and puns are real masterpieces! So we’d like to draw your attention to them – but don’t worry, there’s nothing sketchy about them! We thought we’d better book up our ideas, so we’ve turned over a new leaf and brought you these funny book jokes and puns. They’re definitely a good read! You’re sure to derive a lot of fun from these hilarious calculus jokes and puns! There’s no limit to the laughter they’ll cause! College days are a time to study and learn. And to drink too, of course! But also a time to laugh and have fun. 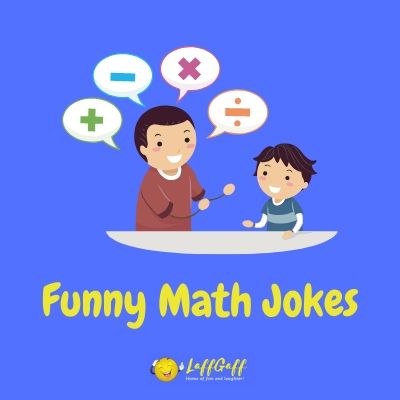 Funny math jokes for kids and teachers – a collection of the very best jokes for mathematicians of all ages! Funny teacher jokes are in a class of of their own! A great teacher inspires respect and admiration. But they also know how to laugh too. Genuinely funny test answers. A collection of hilarious exam answer howlers from students that make you worry for our future! We’d like to propose a toast because these funny graduation jokes and puns are in a class of their own! So con-grad-ulations – enjoy them! Check out these funny library jokes and puns! We bet you’ve never read any better so be sure to bookmark them for later! Math puns are an integral part of LaffGaff. In fact, we find math humor so add-ictive we thought we’d bring you another page packed full of funny math puns to make you groan! There’s nothing irrational about laughing at these funny pi jokes and puns! Celebrate pi day with some straight-to-the-point math humor! Statistically speaking, these are the funniest statistics jokes you’ll read on this page! And because of that it would be mean of us not to bring you them! You don’t have to be a genius to find these funny Einstein jokes and puns relatively amusing! So we thought it was about time we found space for them! We’ve been charged with the task of bringing you the funniest atom jokes and puns! We couldn’t say Na to a challenge like that, could we? So here they are – keep an ion them! You don’t like plant jokes? What stomata with you! Don’t worry though, because these biology jokes and one liners don’t just include plant jokes. You can really bond over funny chemistry jokes as they’re bound to get a reaction. Some of them may be bad but only because the good ones argon. Nerdy jokes (or should that be dorky or geeky?) are some of the funniest in our opinion so we’ve put together our top funny nerd jokes. We think you’ll agree that these funny physics jokes definitely have potential! They certainly won’t cause any friction. If you could go back in time, you’d miss all these funny time travel jokes and time machine jokes so what would be the point?! We thought it would be gneiss to bring you these funny geology jokes and puns because they rock! We hope you appreciate the sediment! We thought you’d be over the moon if we brought you these funny moon jokes and puns, so here they are! You’re sure to feel a certain chemistry with this funny periodic table jokes and puns! At least from time to time anyway! We were a bit worried if you would reactor not to these funny radiation jokes and puns, but then we thought, what’s the worst the fallout could be, so here they are! Read them before they decay! There’ll be nothing robotic about your response to these funny robot jokes and puns! They’re sure to recharge your laughter batteries! Science puns always get a reaction. And these are no exception. Yes, they definitely won’t zinc without trace! We had to planet for ages, but we’ve finally managed to bring you this out of this world collection of astronaut and space jokes and puns! Read more now …

Connect With Us
About Us